With over 200 pizza ovens installed worldwide California Pizza Kitchen (CPK) is currently Wood Stone’s largest customer, but that wasn’t always the case. Prior to trying their first Wood Stone oven, CPK had used many different manufacturers’ ovens. The story of how we eventually came to be CPK’s exclusive supplier of stone-hearth pizza ovens explains much about the quality of Wood Stone equipment and our dedication to meeting our customers’ needs.

CPK opened their first pizza restaurant in 1985. By the time Wood Stone was founded in 1990, CPK was already a major player in the emerging ‘niche’ market of stone-hearth pizza. Naturally, we wanted their business, and although we were initially told that our pizza ovens were too expensive, we kept trying. We knew that our pizza kitchen ovens were made with higher quality materials that would outlast anything on the market (to date Wood Stone has never had to replace an oven), and our customers told us that our oven’s innovative design performed better. In 1993, Wood Stone finally had the opportunity to solidify their relationship with CPK. Here is how that opportunity came about…

By the early 90’s CPK had built dozens of stores that traditionally contained two stone-hearth pizza ovens. While many of these stores were busy, they had never seen anything like life in a Las Vegas Casino. Because of space constraints, when they opened in Las Vegas’s new Mirage Casino they installed a single oven. The good news was that they found they were almost continuously busy with a constant stream of hungry customers. The bad news was that the non-stop demand for pizzas was accelerating a damaging degradation of the oven floor called spalling. They had seen this occurring at a slower rate in many of their other ovens, but never at this speed.

After less than two years time the floor of this first Mirage oven was so compromised that they had the original manufacturer replace it. Shortly it became clear that the second oven was not holding up well either, and CPK realized that the replacement oven was going to last about as long as its predecessor and that they were facing another inconvenient and expensive oven change out. It is important to keep in mind that this was the busiest single pizza oven kitchen in their history, and that this restaurant was in a venue that never closed, so tearing out the oven was not ideal. Having just purchased some of our ovens, and being initially impressed with our product, they took a chance and called us for the next replacement. The oven installed in 1993 by Wood Stone is still in place today consistently producing nearly 1000 pizzas per day with high volume periods as high as 1400-1500 pizzas. With very few exceptions, ever since that day Wood Stone has been CPK’s oven supplier. Their continued business is one of our greatest endorsements, but the story doesn’t end there…

At Wood Stone we know that our customers can be our greatest innovators so we let them lead us toward new advancements. Listening to them has helped us reshape our company and we believe, in a small way, revolutionize a segment of the foodservice industry. Before 1990 stone hearth ovens were considered a quaint fringe product used by only a handful of celebrity chefs and restaurateurs (in addition to CPK, people like Alice Waters and Wolfgang Puck led the way). With the technological improvements Wood Stone has been able to incorporate, you can now see stone-hearth ovens not just in those signature restaurants, but also in grocery stores, university dining halls, corporate cafeterias, mom & pop corner pizzerias, retirement complexes, hospitals and world class hotels and resorts. Currently there are convenience stores cooking pizzas to go with a tank of gas and nightclubs firing off hot wings in a Bistro 4343 for the late night revelers. Where will our customers take us tomorrow? Tough to tell, but we can tell you one thing: we’re all fired up! 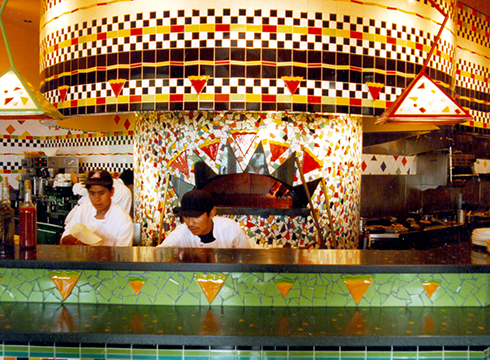